Q1 : What is the maximum width or height of shell plates that can be erected with the jacking system.?

Q2 : What is the minimum thickness of shell plates suitable for jack-up method?
A : Precautions such as fixing a temporary stiffener ring and pad plates for lifting lugs shall be taken while jacking up of 6.35 mm thick plates or plates of less than 6.35 mm thickness to avoid buckling of plates.
Q3 : What is the ambient temperature range at which jacks can be used?
A : Bygging jacking equipment can be used in a temperature range of –18 degrees Celsius to +50 degrees Celsius.
Q4 : Should the roof plates be fixed before the erection of jacking equipment?
A : When the top-most shell course (first course) is erected, openings shall be left in roof at jack locations to allow the trestle column to protrude through the roof. These openings shall be closed with roof plates after the top shell course is lifted up.

All roof plates can be fixed before the erection of jacking equipment, provided the height of the top two shell courses + the spacer beam (stool) is more than the height of the trestle. The standard trestle height is 3500 mm, although this may be more in case of non-standard equipment or in case of jacks with lifting hooks.
Q5 : What is the time taken for lifting a tank up by 2.5 mtrs.?
A : The time for lifting a tank up to 2.5 mtr height is as follows:

Q6 : What is the stroke per lift?
A : The stroke length of the jack is 100 mm or 10 cm.
Q7 : What if a hose bursts or oil seal ruptures during lifting?
A : The jack is a fail-safe device. In the event of a hose rupture during lifting, the mechanical grip jaws prevent the jack from moving downwards and will hold the jack at the same position on the jack rod fixed to the trestle. Lifting should be stopped and the hose replaced. The jacks do not move downwards with the load even if the hose bursts. The load is not held merely using a check valve.
Q8 : How do personnel enter inside the tank when the jacking system is used?
A : Spacer beams of about 450 mm to 500 mm height are provided around the periphery of the tank on the tank bottom plate. The shell plates are placed on these spacer beams. Personnel can enter into and out of the tank through the gap provided by these spacer beams.
Q9 : Will all jacks lift evenly, or will there be a difference in the lifting time of all the jacks in one tank?
A : All jacks are connected to a common powerpack. When the powerpack is operated, oil flows to all jacks and an oil cushion is formed. The load is balanced on the oil cushion. The powerpack pumps oil at a constant pressure to all jacks simultaneously.

In theory, the flow with which oil is pumped from the powerpack is equally divided into the number of jacks being used. However, there could be some differential lifting between all jacks used in any given tank, since oil finds the path of least resistance. Assuming that there is a difference in level at two opposite points in a tank, of 100 mm (which is the maximum stroke of the jacks), and the diameter of tank is 90 m, then the inclination is 0.06 degrees.

If the tank diameter is 20 meters, then the inclination is 0.28 degrees.

This can be absorbed by the in-built elasticity in the tank shell. After all jacks complete their stroke of 100 mm, the tank is in perfect plumb again.
Q10 : What is maximum safe wind speed at which a tank can be lifted using jacks.

A : The safe wind speed large depends on parameters such as diameter, weight and height of the tank and the number of jacks in use The number of jacks is determined so as to make lifting safe at maximum 22.5 meters per second (81 km/hr) (strong gale wind), in general.

Q11 : How to determine the number of jacks to be used for a particular tank.
A : The number of jacks required for a tank is determined by:
Q12 : Can the jacks be placed outside the tank?
A : For repairs to tank bottom plate or foundation, jacks are placed outside the tank. In this case, appropriate temporary support arrangement (concrete or steel base) is to be made outside the tank to support the trestles and stay pipes, such that the load is distributed to the ground evenly.
Q13 : Is it possible for the tank to fall down during lifting or when held by the jacks?
A : Each jack has two pairs of case hardened grip jaws made of special grade of steel. During lifting both the pairs are in “locked” position. In this position, the jack can move only upwards. Therefore, the tank cannot fall down when held by the jacks. During lowering of tank, one of the pairs of jaws is locked, which is loaded & hence prevents the tank from gravitational fall.
Q14 : How long can the tank be left in lifted position, i.e., when the load is on the jacks?
A : Normally, after the lifting is done, immediately the next shell plate is put in placed and fitted up to the previous shell plate, thereby releasing the load from the jacks. It is not advisable to keep the jacks loaded for more than the time required to place the next shell course in position and fitting up. In case wind of velocity more than 22.5 m/s is expected during this period, the tank should be tied down with guy ropes.
Q15 : What is the life of the jacks?
A : The jacks are of robust design and construction. If periodic maintenance is carried out as per our recommendation and the equipment is protected against the elements, the expected life of the equipment can safely be considered as 10 years
Q16 : What is the shipment time required for jacks?
A : Jacking equipment can be shipped from India within two to eight weeks (plus transit time) depending upon quantity and model of jacking equipment.
Q17 : How much time and how many men are required to set up the jacks.
A : 15 to 20 man-days are required to install up to 50 jacks in one tank. Lifting of tank up to 2500 mm takes 40 minutes and requires 2-3 men from amongst the site crew.
Q18 : Whether tanks with column supported roof be erected using jacks?
A : Many tanks with column supported roofs have been erected using jacking equipment, by fixing 1 or 2 jacks on each column. The columns are erected in segments of the same height as that of the shell course.
Q19 : Can floating roof tanks be erected using jacks?
A : Many floating roof tanks have been erected using jacking equipment. When the jacking equipment is installed inside the tank, the floating roof deck is erected inside the tank except in the peripheral annular space of about 2 meters wide. The pontoons are erected after completion of the shell erection after the jacking equipment has been removed. The jacking equipment occupies approx. 2000 mm of annular space inside the tank periphery.
Q20 : Whether automatic girth welding machines can be used when the tank is being constructed using jacking system?
A : For tanks built “TOP-DOWN”, single side SAW automatic girth welding machine is used for horizontal welds. First outside horizontal welding is completed using the BYGGING Single Sided SAW Girth Welding Machine.

If you intend to use the submerged arc automatic girth welding (AGW) machine for internal welding of horizontal joints, you will need our 'retractable' type of jacking equipment which retracts away from the tank shell allowing the AGW machine to pass through.

With the retractable mechanism, the jacking trestles retract hydraulically creating a gap of 1600 mm between the tank shell and the trestles allowing the AGW to pass through. Please see the drawing below. 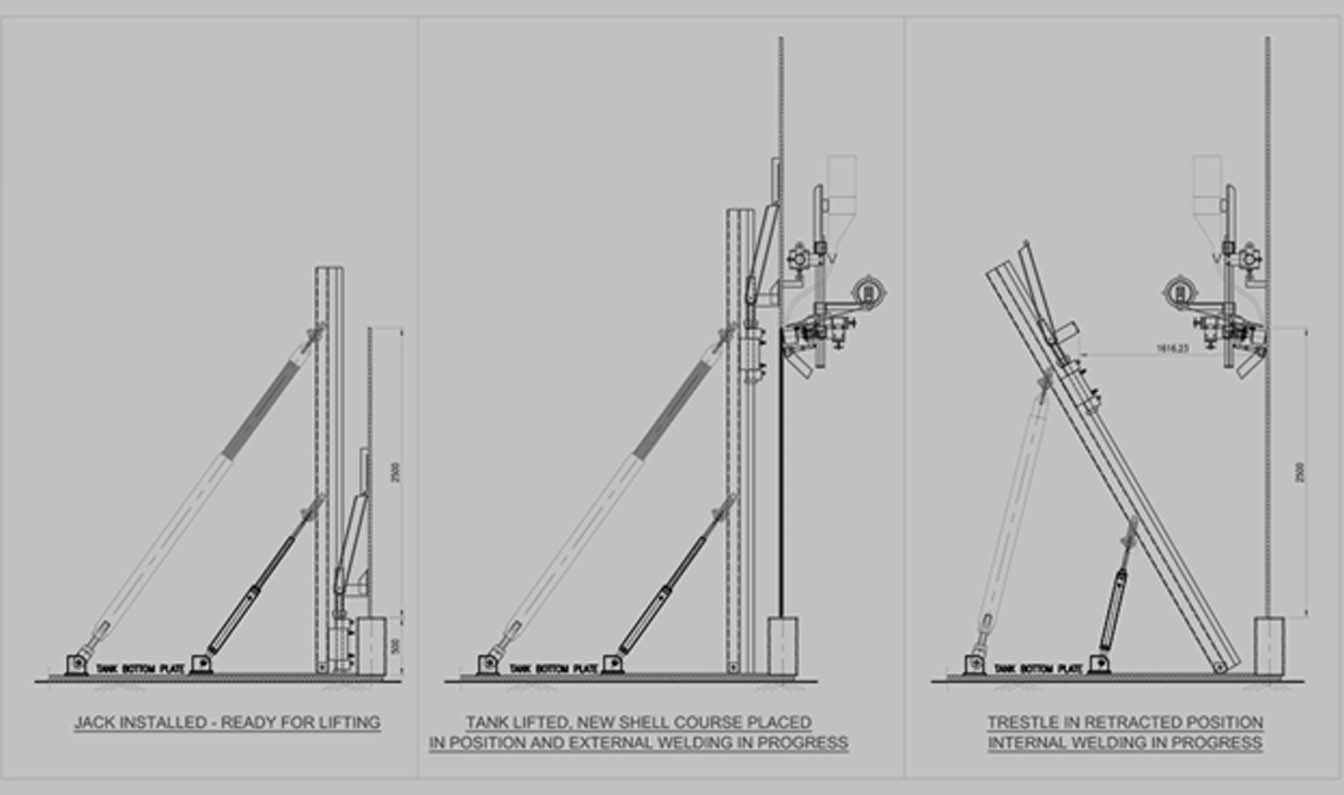 Q21 : What if the Oil gets heated up?
A : There is no cause for concern as long as the oil temperature is less than 80 degrees Celsius. In case it exceeds this figure, lifting should be stopped and the oil allowed to cool down before resuming lifting. If there is abnormally fast heating of the oil, please contact our technical support. The Powerpack shall be kept under shade to prevent excessive heating of oil as a result of direct sunlight.
Q22 : During the first lift, is air bleeding required to be done from the hydraulic cylinders ?
A : There is no need to bleed air from the hydraulic cylinders when using the Bygging jacking equipment.